If you’ve been searching around for the best survival tool or even the best land clearing tool, you’ve been presented with a lot of different options. While many of the other tools that you’ve seen likely have some nice features, there isn’t anything out there with the features, versatility, or history of the Woodman’s Pal.

History of the Woodman’s Pal

In the beginning, the Woodman’s Pal was sold as a land management tool, used for forestry and agriculture. However, it was soon recognized as an excellent addition to the standard equipment of U.S. soldiers. First procured during World War II, it was the best survival tool for soldiers dealing with both forest and jungle terrain. At that time, the Pal was issued as “Knife LC-14-B” to the Signal Corps and others, and came with a cotton case, use and sharpening booklets, and a sharpening stone. Later, the brush clearing tool was designated as the Type IV Survival Axe and provided to aircrews, helicopter crews, and others during the Vietnam War.

Today, the Woodman’s Pal is still manufactured in Pennsylvania to the original WWII LC-14-B military specifications.

The Woodman’s Pal is meticulously created and assembled for daily use, while also being manufactured to exacting standards that make it a family heirloom.

When you order a Woodman’s Pal today,  you get a survival tool that is made to the same size and standards used by the brave men fighting during World War II. Like those soldiers, your purchase comes with a sharpening stone as well as authentic copies of the original 1941 Owner’s Manuals. 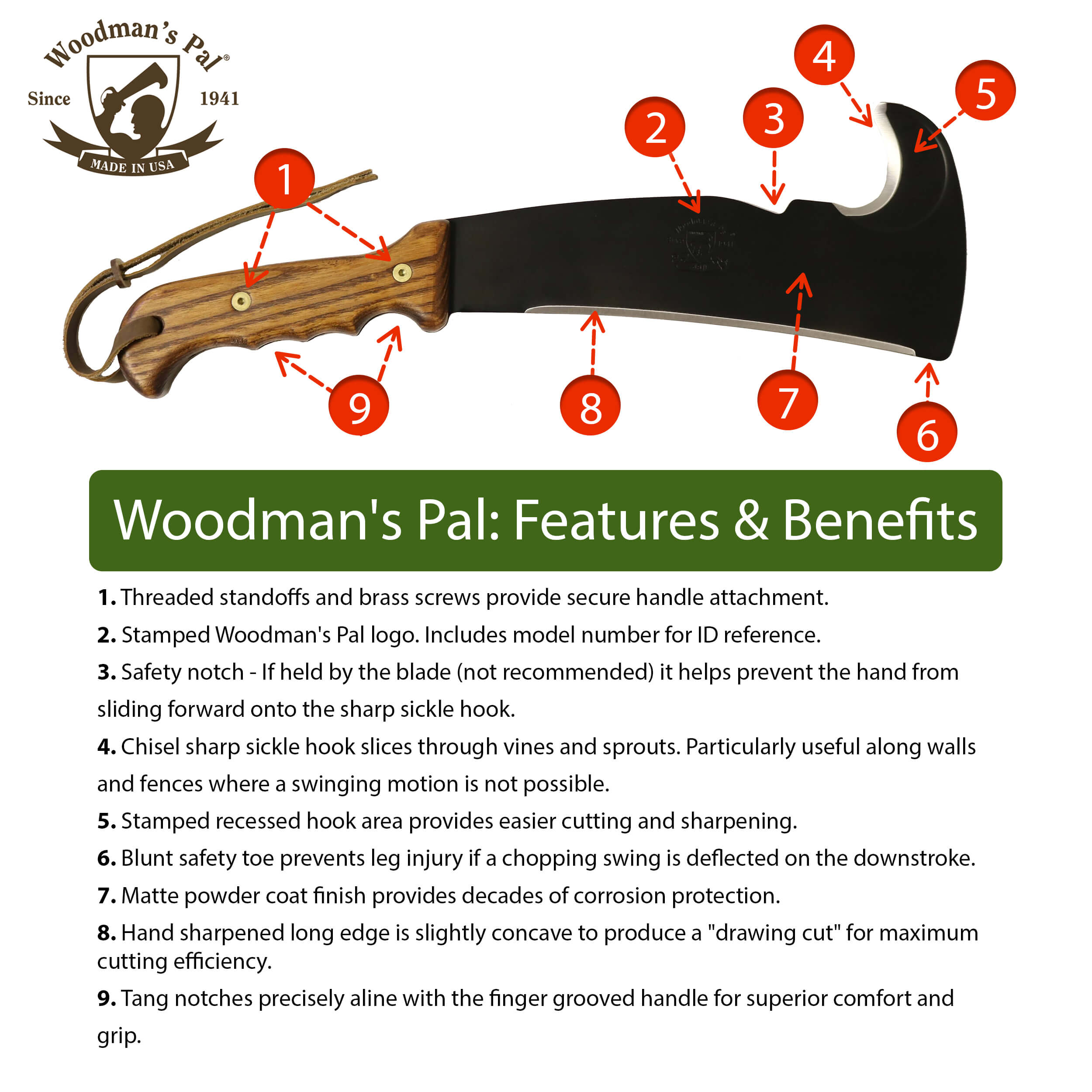 As an upgrade to the military issued land management tool, the Woodman’s Pal also comes with a leather belt sheath, letting you keep this survival blade close at hand without taking up room in your pack.

Perfectly balanced, the Woodman’s Pal has an efficient, accurate, and comfortable swing action for brush and land clearing. A single stroke can chop a 1.5” diameter sapling or branch, while larger trees and bushes can be removed with successive notching.

The end of the blade contains a sickle hook, making vine clearing simple – the hook not only cuts the foliage but grabs and pulls it for easy stacking and removal. The handle is coated and hand-rubbed with beeswax, increasing grip and tact. Slightly lengthened from the original spec, the ash wood handle is designed to reduce fatigue and is securely attached with threaded standoffs and solid brass screws.

The blade can easily put up with tough daily use. Made from 1074/1075 spring steel, it’s laser cut and treated at up to 1500 degrees Fahrenheit. Each blade is hand sharpened by craftsman and coated with a solar matte powder coat finish to protect from corrosion. And the slightly concave blade allows for a drawing cut that increases the blade’s efficiency.

Built to last, this land clearing tool is loaded with usage and safety features that make it the top choice for land clearing crews, homeowners, surveyors, survivalists, and outdoorsmen.

For anyone with land to clear, the Woodman’s Pal is your best friend. Whether you’re clearing and managing the back 40 of your property, trying to access overgrown areas to do surveying, or on a utility or groundskeeping crew, this brush clearing tool combines multiple solutions in an easy to carry, single device.

Survivalists and outdoor enthusiasts also benefit from its use. The Woodman’s Pal is simply the best survivalist tool, providing the ability to clear space, chop wood for a fire, and trim and split wood. Should the situation arise, the 17” blade gives you reach when you need to protect yourself and your loved ones. And with the belt-mounted sheath, the Woodman’s pal is always at hand in any situation.