How to Open a Coconut with a Machete

One of the more fun uses of your machete is using it to open coconuts!

Don’t fool yourself – coconuts are a tough nut to crack. But using a machete makes the task a lot easier.

Let’s take a look at the humble coconut, why choose a machete versus a knife to open one, and how to use a machete to access the tasty interior of this tropical fruit.

Coconuts and Why They are So Hard

Coconuts grow on very tall trees in tropical regions as far north as Hawaii and as far south as Madagascar. These trees are called coconut palms. 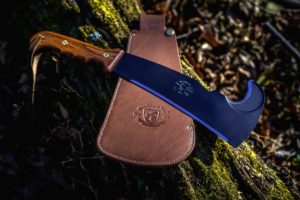 Despite being called a coconut and having a hard outer shell, they are not actually nuts. Instead, they are fruit and seed. When a coconut falls from the tree and germinates, a shoot emerges from one of the three recognizable “eyes” on the end of the fruit.

Not only is the coconut not a nut, but the coconut palm isn’t actually a tree. Despite being woody, a coconut palm doesn’t have bark or branches, both of which are required under the definition of what a tree is (scientifically, of course).

Consumers typically see a few different forms of the fruit. When full-sized – which takes about a year – a coconut weighs roughly 3 pounds and is encased in a hard, hairy husk. It’s believed that the husk exists to help prevent the coconut from cracking when it falls from the top of the coconut palm to the rocky ground below.

Frequently, the husks of the coconut are removed when they are shipped to places where they are not locally grown. This is to reduce the overall weight of the fruit. Although easier for the average, non-machete-wielding person to open, these de-husked coconuts also have a considerably shorter shelf life of only two to three weeks.

Using a Machete to Open a Coconut

When you’re removing the husk and opening a coconut, you may wonder which is better, a knife or a machete. Depending on your use of the coconut, a knife may work fine, especially for an immature coconut where you’re just trying to get at the water. Even then, you’ll want to use a heavy knife for the task.

But if you’re faced with a mature coconut, you won’t want a lesser blade for the job. A machete is what the professionals that harvest coconuts use, and it’s the kind of blade you should turn to, as well.

To remove the husk with your machete:

To remove the shell of the coconut: 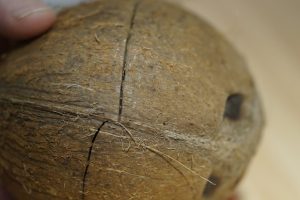 Fresh coconut water should be clear with a clean, sweet aroma. If the water has a pink color, discard it – the coconut water is spoiled.

Once open, the fresh coconut water can be enjoyed and the coconut meat can be scooped out to be used. Coconut meat can be shredded and used in desserts, broken into chunks and added to stir-fries or stews, used as a garnish, and blended into smoothies. You can also use coconut meat, combined with water in a blender, to make coconut milk which can be used in cocktails, curries, and many other tasty recipes.