How to Use a Machete for Self Defense

When it comes to versatility in bladed instruments, the machete is unmatched. This tool has been used for thousands of years to blaze trails, harvest crops, assist in building structures, cook, and virtually any other task necessary to survival. Today, many people debate over whether or not the machete is an effective weapon, and while this was not the primary purpose, it can certainly be used as a self-defense tool. Just as the machetes of yesterday were, the Woodman’s Pal was created with versatility and combat in mind and provides a durable and effective survival tool regardless of your situation.

History of the Machete as a Weapon 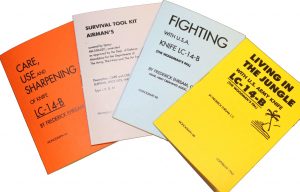 For thousands of years, the machete has been used mainly as an agricultural tool. Still, as any bladed instrument can, it has the capacity to cause damage and effectively defend against attackers as well. The machete is still used as an everyday tool in many impoverished South American, African, Asian, and West Indian countries. These people often find themselves in situations where they need to defend themselves against animals or other human attackers and have learned to use the tool they most commonly have on their person.

What truly sets the machete apart from other bladed instruments is that it is not strictly a production tool or a weapon, but it serves effectively as both. One could argue it is only used as a weapon out of necessity, and they wouldn’t be wrong, but this still doesn’t disqualify it as an effective tool for the job.

The strongest argument for the efficacy of a machete as a weapon is the Haitian Revolution of 1791-1804. In the span of 13 years, liberated Haitian slaves overthrew the French in what is to be known as the only successful slave revolution in recorded human history. What makes this all the more impressive is that the Haitian people were extremely limited on resources and were forced to use what they had as weapons which mainly consisted of various farming tools such as pitchforks, axes, and machetes. This singular instance where impoverished slaves overthrew what was arguably the world’s most powerful colonial country at the time offers all the proof needed to classify the machete as an effective self-defense tool. Still to this day, a select few Haitians honor their forefathers by keeping alive the art of Tire Machet, the martial art of machete fencing.

With that proof in mind, you may be wondering how to use a machete for self-defense? Well, wonder no more because we will cover the basics of wielding a machete against an attacker so you can be prepared in the event of an emergency. For an excellent historical resource, consider reviewing the official WWII fighting manual that all soldiers received with their standard-issue Woodman’s Pal during the second world war.

One of the main advantages of wielding a machete as a self-defense tool is that you can possess one virtually anywhere. A trait that is especially helpful in those areas of the world where more efficiently lethal weapons, such as firearms, cannot be possessed. Another advantage to the machete is that it can be concealed on or near your person wherever you go making it a great tool to keep in the home, vehicle, and even on your person where threats are ever looming.

While the validity of the machete as a weapon is disputed, one thing everyone can agree on is that they offer a fair bit of intimidation to those on the wrong end of one. As a result, simply brandishing a machete against an intruder or attacker is sometimes all that is needed to defend yourself safely. Unfortunately, this isn’t always the case, and in those rare yet life-threatening situations, it pays to understand the basics of using a machete and yielding one against an attacker.

If one takes the prospect of machete self-defense seriously, then there is no substitute to practice. As a weapon, the machete is used in much the same way as any other blade or stick and is best understood with a standard universal training template covering all of the basic movements that one would use in combat. You should practice the following strikes until you develop the muscle memory that will allow you to yield a machete against an attacker effectively. If you don’t feel comfortable practicing with a live edge, then you can substitute your machete for a stick or practice blade of some sort. Once you have the following strikes committed to memory, they will translate to any blade or blunt object and significantly increase your chances of fending off an attacker.

You can find a great visual representation of this striking template here. However, it is essential to note that in a fighting situation, you will not necessarily use these moves in sequence as they are above, but by committing them to memory, you will be able to employ them in the heat of the moment on instinct rather than taking the time to think about them.

Woodman’s Pal Machete for Self Defense

If the machete is the most versatile bladed weapon, then the Woodman’s Pal is the most versatile machete. In the 1930s, Frederick Ehrsam set out to introduce to the world a bladed tool that combined the defining attributes of all of the World’s most effective blades up until that point. This goal very well could have been influenced by his Swiss forefathers’ creation of the Swiss Army knife in the late 19th century. In 1941 Ehrsam brought the Woodman’s Pal to the market, and his quality blade was a game-changer. Upon realizing its effectiveness as both a brush-clearing tool and a weapon, the United States Military began issuing the Woodman’s Pal to those serving in the Pacific.

To this day, we make each Woodman’s Pal with only the best materials so you can count on yours for years to come. Visit our store today and get your very own Woodman’s Pal so you can defend yourself when it matters the most.