Comparing a Machete vs. a Knife

Bladed instruments are one of the oldest and most universal tools known to man. They date back to the earliest recorded history and have served to harvest, maintain, and war for thousands of years and are still being used for many of the same things today. No matter where you go in the world, you will see bladed tools being used in some capacity, and while the application may be different, the need for blades is consistent.

With all of the different shapes of blades available today, it can be hard to know what to look for when buying your own. Do you want a machete or a knife?

Below is a complete machete vs. knife guide comparing the two tools, their strengths and weaknesses, and how they fare against each other in different scenarios.

Cutting vegetation is one of the most common things you can use a machete or knife for, and while both are viable options, the machete is going to be the best choice when it comes to most plant clearing scenarios.

While machetes were initially used as a multi-tool for daily tasks, if seen today, they will more often than not be used as a way to clear some kind 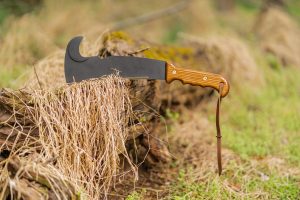 of vegetation. Machetes excel at clearing plants and can take on anything from grassy growth to woody saplings and brush with ease.

One of the best machete styles for cutting vegetation is the billhook with a hooked tip to allow the wielder to cut off growth at the base with ease.

While some knives may be large enough to dispatch plant growth effectively, they are generally too small to have the same effectiveness as the machete. This same fault of being too small is also one of the knife’s greatest strengths. A knife is the better choice for precision cutting and removing small growth close to the ground as you would in weeding a flower bed.

A knife is also the best choice in some agricultural applications. An example of a time like this would be when you find yourself harvesting tall plants in tight rows.

Skinning game is an essential job for hunters and outdoor enthusiasts, and if you have ever done it before, then you know how important it is that you have a tool sharp and robust enough for the job. Two things are necessary for a practical skinning knife – a sharp blade and a point at the end. The need for a point makes a knife the best choice in this scenario, but some machetes can still get the job done.

When looking at the design path of modern-day machetes, you can see them becoming increasingly plant-focused in their intended use. Several 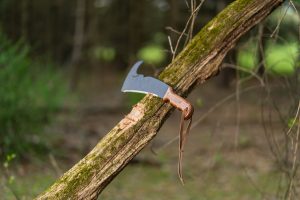 things can account for this, but the apparent reasoning, especially in America, is that a tiny percentage of people harvest their meat anymore. Even most hunters opt to take their game to a processor who is more than likely to use specialized industrial tools for the job.

Some machetes can still be used to skin game, and the argument could even be made that all machetes can be used to do it if you’ve got the time and patience required. But using most machetes to skin an animal is like trying to fit a square peg into a circle hole. The ideal machete for skinning an animal is the Bowie machete – it has the plant clearing ability of a machete, but it comes with a tip modeled after the Bowie knife making it perfect for harvesting your kill.

A knife is going to be your best bet when it comes to skinning animals. They are smaller in size, making the minor precise cuts necessary when cleaning an animal much more manageable. In addition to their size, the blade design in and of itself is more fitting for the task.

The sharpened point of a knife makes the skinning process much more efficient. If you plan on harvesting any wildlife, then you can’t go wrong by carrying a sharp knife with you. If you only want to bring a single tool, then I recommend a shorter Bowie machete to get the best of both worlds.

Bladed weapons have been used for self-defense since their inception, and while not as expected, they can still be seen being used in this capacity today. Every military branch has some standard-issue blade – from the American K-Bar to the Nepalese and Indian Kukri. While not so common in everyday American civilian life, you can find knives and machetes being used for self-defense all around the world.

As mentioned above, the mass majority of machetes manufactured today are figuratively more suitable when it comes to eating salads than they are at steaks. That being said, I think it is important to note the main distinctive advantage the machete has over a knife when it comes to combat.

A machete is much longer than a knife, so you have a substantial reach advantage that comes along with that. On the flip side, this added length can be a fatal downfall. Should an attacker have the chance to get in close, they essentially render the machete useless.

Knives are the best for close-quarters combat and can be a lightweight and easy to conceal self-defense tool for any situation. Up close, a knife is unbeatable; the risk lies between the initial engagement and the time it takes to get in close enough for the knife to be practical. We suggest avoiding any situation where you think you will have to resort to bladed combat, but as the saying goes, it’s better to have and not need than to need and not have.

Having a bladed tool is essential for spending time outdoors, but if your tool doesn’t meet your specific needs, you might as well not have it at all. Time spent with both machetes and knives will lead to your eventual conclusion about which one is right for you.

If you don’t want to spend the time deciding on which tool is ideal for you, head on over to our store to check out our original Woodman’s Pal – the all-in-one survival blade you didn’t know you needed.