A machete is without a doubt one of the most valuable survival and outdoor tools you can own. Versatile in its use, a machete is perfect for everything from cutting grass at home to the skinning game in an actual deal survival situation, so keeping one nearby for those unexpected or planned moments is worth your while. 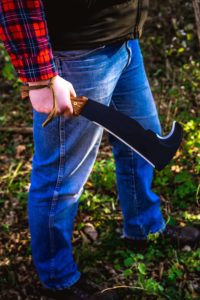 Machete is a broad term used to classify long-bladed tools – it’s bigger than a knife, smaller than a sword, but capable of doing the job of both. Since machete is an all-encompassing term, it can help understand the different types available.

Below is a short guide covering the most common types of machetes, where they came from, and what they are used for.

The Barong machete is an ancient single-edged blade that can be traced back to the Philippines. The Barong blade is shaped like a leaf and is generally between 8 and 22 inches in length. These tools were traditionally used for both agricultural and wartime applications.

The leaf shape of the blade comes to a point, so when properly sharpened, the shorter Barong blades are an excellent choice for the skinning game.

Another thing that makes the Barong a great tool for cutting is the thickness and overall weight of the blade. The heavier versions of this blade make a great alternative to carrying a hatchet.

Billhook machetes look exactly like they sound and serve as an important agricultural and plant clearing tool. The earliest known billhooks date back to the Bronze age ranging from 3100 BC – 300 BC, and while slight improvements have been made to the design, the overall function and look have remained the same.

The origin of this weapon can be traced back to Europe, more specifically, France and Germany. Over the years, European settlers brought the tool to the rest of the world through their exploits and saw how the billhook remains popular today; it was well-received.

While any bladed tool can arguably be used as an instrument of war, the billhook isn’t the most practical tool for the job. This doesn’t mean it is a lousy tool, just that its specialty lies elsewhere.

The billhook is the ideal machete for cutting woody plants often encountered when clearing brush, farming, and maintaining a property. Many modern-day machetes have incorporated some hooked tip to achieve the same functionality as the billhook.

Kukri is an Asian blade with roots that lie in Nepal and India. At 10-15 inches in length, this utility blade has a gradual curving, the extremity of which varies from blade to blade. It serves as a multi-function tool great for clearing plants and hand-to-hand combat.

The Kukri is such a practical blade that it is still issued to Nepalese army recruits and some Indian military units and regiments. While the length of the blade will differ by model, the most common Kukris are anywhere from 10-15 inches in length.

Like many bladed tools of today, the Bolo can be traced back to the jungles of Asia. Commonly used in the Philippines, the Bolo can now be found all over the world. The design of this blade varies by manufacturer but it both curves and widens from the hilt to the blade’s tip.

With this design, much of the blade’s weight is shifted towards the front, making it a great choice for chopping foliage and small timber. Historically the Bolo has served as both an agricultural tool and as a weapon amongst Filipino soldiers. 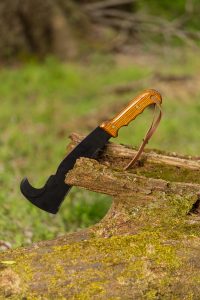 practitioners. While the shape of this style of blade is not defined, most of the weighted machetes out there consist of a rectangular blade with an unevenly distributed weight.

The weight is concentrated toward the tip or sharpened edge of the blade to increase the cutting power, making this type of machete the best choice when it comes to cutting thick vegetation and wood.

The Bowie Machete is a standard machete except for the tip, which is forged in the same fashion as the tip of a Bowie knife. This makes the Bowie machete the best choice when it comes to harvesting and dressing game. That being said, the Bowie machete is an extremely versatile tool and can also be used in the practice of brush clearing and woodcutting.

Panga machetes are one of the most common shapes for a machete to have and were first popularized in Africa and tropical Caribbean countries. Pangas are commonly 12-18 inches in length and are used as a general cutting tool. Weighted towards the belly, this style of a machete is great for chopping. In addition to the chopping ability, the point of the Panga is upturned for increased piercing capabilities.

Parangs can be traced back to Indonesia and are a great choice for cutting through thick vegetation found in woods and jungles. Both the belly and the spine are curved on this blade opposite the Kukri, as mentioned earlier. This helps the blade resist becoming lodged into the material 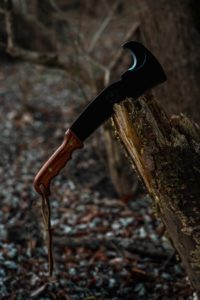 being cut. The blade on a Parang is usually weighted, making it an excellent choice for chopping brush and wood.

The Woodman’s Pal was designed to incorporate as many of the traits of the above blades into one. This makes our blade unmatched when it comes to functionality and versatility. I hope the above information gives you a better idea of the different machetes available and what situations they are best suited for. If you aren’t sure which blade best suits your needs, then head on over to our store and check out the Woodman’s Pal, which is suitable for all situations.